Last night a friend of mine was trying to post photos to Facebook. We were at Stowe Cider for their Cider House Rules event, which, by the way, was a lot of fun. Unfortunately for my friend the Facebook app was slow to load and it crashed a few times on her iPhone. The slow Internet connection was the likely cause of the problem, but even if the Internet connection had been better, my friend would still have to wait for the Facebook app to do its thing before she could post the photos. That’s when I showed her my app, Cross Post.

ANN: Cross Post v1.2 is in the App Store

The latest update to Cross Post has hit the App Store. This update fixes bugs and adds new features including: 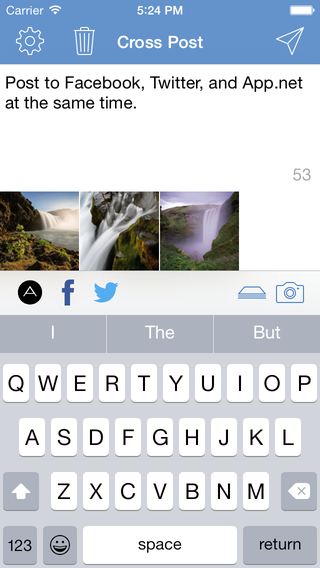 I am thrilled to announce the release of Cross Post, a new app for iPhone and iPad that makes it simple to share your post, photos, and links to Facebook, Twitter, and App.net. I talk in detail why I decided to write Cross Post over on my personal blog site, but long story short, I wanted a better way to share my thoughts and photos across different social media sites. And Cross Post is that better way.